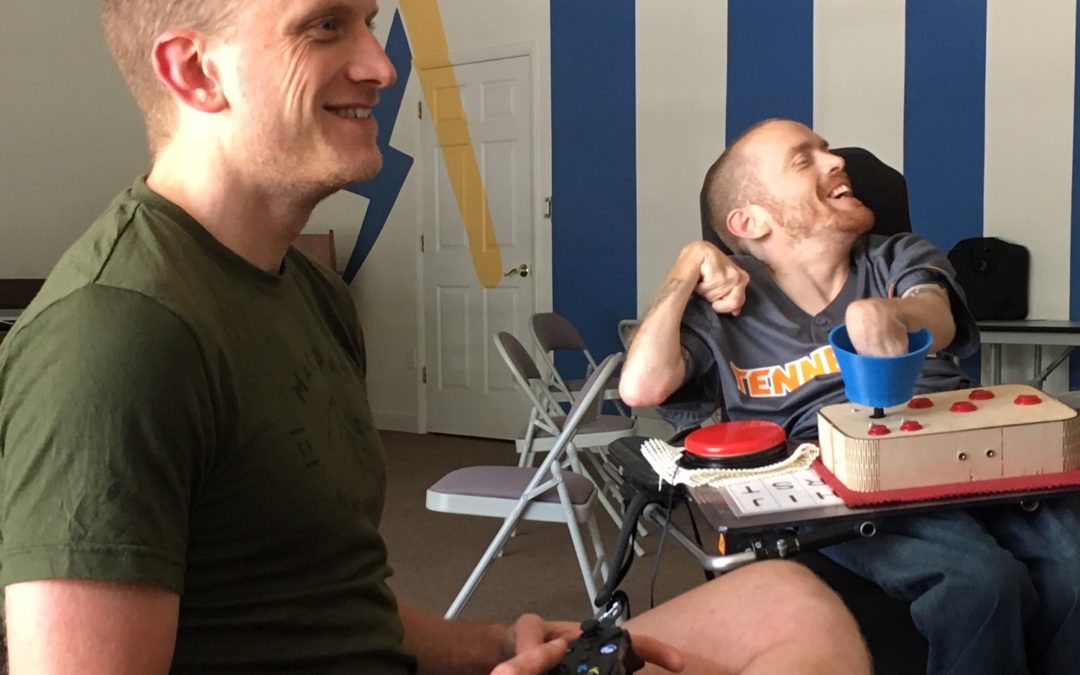 No Matter How Many Times It Takes, Spark’s Lead Innovator Committed to ‘Go Back and Make It Better’

It’s taking more than a little trial and error, but for Gatlin McPherson, it’s literally a game-changer.

McPherson, 34, of Powell, is a University of Tennessee communications major. He uses a wheelchair and an eye-driven tablet communication system (as seen in the ABC TV show “Speechless”).

For McPherson, a little thing can make a huge difference.

And one simple thing that would help him navigate around a physical barrier and better enjoy playing video games with more precision is an inexpensive but custom-made cup.

He fits his hand into the “dish design” device and takes command over the game’s action. The cup gives him more control over a joystick, which is difficult for him to use otherwise.

There’s one place he knows of in East Tennessee when he can get such a device.

And Spark’s Lead Innovator, Jedidiah Cuttle, won’t stop making iterations of the cup until he and McPherson are satisfied that it’s the perfect size and shape to fit his hand.

“Growing up, I watched my brother play video games,” McPherson says, using the eye gaze tablet, spelling out his words one letter at a time.

He had been using a standard joystick, “but what Jedidiah designed is better.”

Cuttle watches intently as McPherson tries out the latest CD-printed cup. The two compare notes; the next iteration needs to be tighter, to fit his fist more snugly, to maximize McPherson’s ability to control its movement.

McPherson is a competitor who likes to challenge himself. For example, he’s played “Power Soccer” in a City of Knoxville recreation league.

He recognizes a unique service when he sees it.

Would McPherson recommend someone else trying to find a solution to a disability barrier to come to Spark?

“Most definitely,” he says. Spark “has opened a lot of doors for me.”

Daniel Alexander, a recreation specialist with the City of Knoxville Parks and Recreation Department, first met McPherson through the Power Soccer program. He sometimes sees him at Spark’s office during gaming time.

Alexander, the City’s 2018 Employee of the Year, has a passion for starting new recreation programs and finding novel ways to expand access to more people. The Inskip-Norwood Recreation Center was reinvented into a specialized hub for accessible sports. Alexander is looking at ways to incorporate adaptive video gaming into city recreation programming.

“We want to bring more recreation options to more people, and I thought this was a unique idea,” he says.

Cuttle, meanwhile, finds satisfaction – one challenge at a time.

“It’s a process,” he says. “You design something, see how it works out, and then you go back and make it better,” Cuttle says.

“It’s fun. It’s rewarding. When it’s done, and you see that someone’s situation has been made better – that’s neat. I really enjoy that.”

Eric Vreeland, a former News Sentinel local news editor who is now the City of Knoxville’s Senior Director of Communications and Government Relations, has long admired the work of Spark’s staff and volunteers. In January 2017, he joined the group’s board of directors.