Much of our work at Spark involves helping individuals reach tangible goals. Usually this goal involves gaining or regaining an ability—to see their work as they knit, to use a computer for work, to shower on their own. Sometimes the work we undertake involves a more ephemeral, but no less important, goal: to help someone find space for delight in his or her life.

This past September, Spark had a chance to participate in just that sort of work. Our five-year-old friend Elliot was preparing for Halloween with only half of a costume. He would be outfitted as the Ninja Turtles’ fearless leader, Leonardo. But, when trick-or-treating, he would find his way door-to-door in an undecorated power wheelchair! This situation availed us of the opportunity to bring a bit of joy to the lives of Elliot and his parents, Josh and Angela. 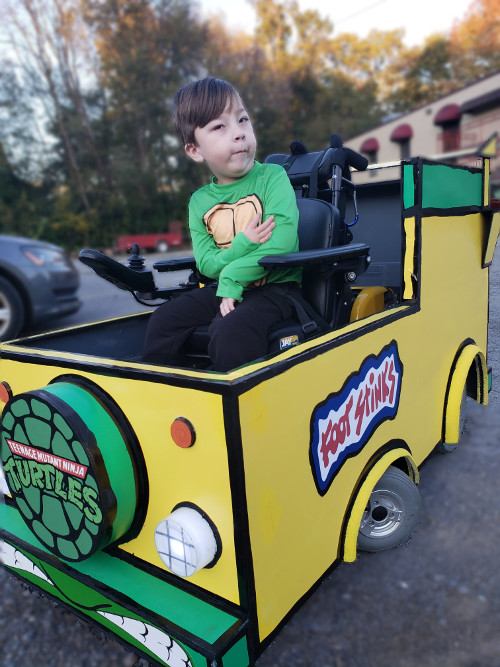 As it would happen, Knox Makers president, Issac Merkle, had come to us several months prior to Halloween, his favorite of all holidays, and told us that the Makers would like to costume a child’s wheelchair. Having worked with Elliot and his family in the past, I came to the project mainly as the point of connection between Elliot’s family and the Makers. Additionally, I was tasked with ensuring that the rad aesthetics of costume did not interfere with the operation of Elliot’s wheelchair. A role that proved largely unnecessary as the Makers were acutely cognizant of such concerns. Balancing these priorities, construction began.

A team of four Knox Makers: Gail, Martin, Issac, and Charlie crewed the project. Their work began with painstaking research into the background and imagery of the Ninja Turtles. They decided to emulate a vehicle from the series, and settled on the most iconic of them: a boldly-colored box van with spoilers, decals, and inexplicably stylized body panels. Working with foam board, paint, and consummate craftsmanship, the Makers embarked on a multi-week project of construction and detailing. Through many after-work hours as well as long weekends, the small team toiled to complete the project in time for trick-or-treating.

Through their dedication, construction completed ahead of schedule. Several days prior to Halloween, we invited Elliot and his family to the space to unveil and deliver the finished product. That evening, we shared in one of those brief magical spells of time where the intended and the realized seem to perfectly match one-another. We attached the costume to Elliot’s wheelchair and watched him roll around in it. Tentative at first, Elliot began to glow with delight at his chair’s new accoutrements, and the attention they brought him. I hopped on Spark’s adaptive hand-foot tricycle and took turns with his father, Josh, rolling around the lot and playing tag. We basked in the warm evening sun while admiring the Makers’ handiwork. Local news station WVLT came to report on the event.

In closing, I do not wish to superimpose my own thoughts and feelings on Elliot, so I will try to speak only from my own experience. Watching Elliot roll around in the Ninja Turtle Van, it felt like he had a moment where his wheelchair captivated the audience around him. In that moment, the attention did not focus on the downsides or the burden it might represent, but instead on the marvel of the machine and its pilot. Festooned with his over-the-top costume, Elliot spent a few hours as captain of his personal superhero van. Those gathered admired him in his chair like they might a passing Bugati, or a high-performance motorcycle. I hope that being seen that way will color the way he looks at himself and at his own mobility. In giving him that moment, I also hope we had a positive impact on his relationship with his wheelchair—a relationship that may be bittersweet. And, maybe for a bit, Elliot’s Ninja Turtle Van amplified the sweet.

Jedidiah Cuttle is Spark’s lead innovator and de-facto IT staff. He has a  professional background in computering and an ill-advised degree in one of the liberal arts. His work at Spark comprises any creations or adaptations that are not documented, pioneered, or understood.